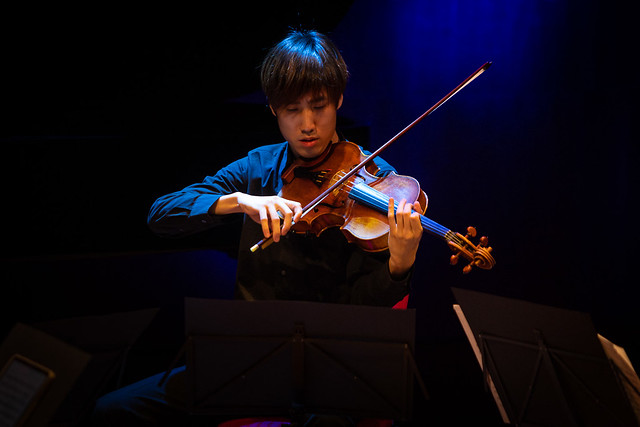 Yamen Saadi was born in Nazareth in 1997. He started to study the violin at the Barenboim-Said Conservatory in Nazareth, and after that he began to study under the guidance of the renowned Israeli Philharmonic Orchestra Concertmaster, Chaim Taub.

Yamen joined the West-Eastern Divan Orchestra, conducted by Daniel Barenboim, at the age of 11 in 2008); 6 years later , he served as concertmaster of the orchestra.

His first solo concert was when he was 11 with the Haifa Symphony Orchestra.

Yamen is an active chamber music player, touring in the USA, Europe and Asia with different chamber music ensembles in halls such as Paris Philharmonie, Boulez Saal. he has participated in many festivals such as Rolandseck festival, Grachten Festival, Hamburg chamber music festival, Gotland festival, Kfar Blum festival and Jerusalem festival and played with distinguished musicians such as Daniel Barenboim, Guy Braunstein, Amichai Grosz, Alisa Weilerstein, Sergei Krylov. Yamen is also part of the Pierre Boulez ensemble since 2016 and part of Musethica since 2017.

Together with four other musicians they formed the Chianti Ensemble, a piano quintet ensemble that plays mostly in holland in all settings possible, duos, trios,quartets….

Yamen has completed his Bachelor in the Barenboim-Said Akademie and is currently studying in Kronberg Academy under the guidance of Prof.Mihaela Martin. These studies are funded by the Jürgen Fitschen/Friederike Lohse Stipendium.

He is currently playing on a violin made by Giovanni Francesco Pressenda 1823 previously owned and played by Chaim Taub and a Jacob Eury bow, both generously loaned to him by Stephan Jensen.

Takehiro Konoe was born 1997 in Amsterdam. He started playing violin at the age of four with Professor Coosje Wijzenbeek. A few months later he became a member of Prof. Wijzenbeek’s string ensemble Fancy Fiddlers where he played until 2015. In 2003, he played with his twins sister Mayu a duet at a legendary dutch Violinist Theo Olof’s 80th birthday party and one year later, they played a duet again with Daniel Wayenberg. Two years later they were invited to play in Monaco at Monique Collignon’s fashion show.

In August 2008, he and his sister were chosen to perform at the Kinder Prinsengracht Concert in Amsterdam. They played J.S. Bach’s concerto for 2 violins in front of more than 3000 people, which was also live broadcast on TV. Later in that year, Takehiro and Mayu performed the same piece in the Concertgebouw Amsterdam with the Nederlands Theater Orkest, and a year later they performed there again with their quartet, Quartetto Piccolo.

In 2011, Takehiro and his sister were honored to play Schumann’s Piano Quintet with Lucas Jussen at Menahem Pressler’s masterclass in the Amsterdam Concertgebouw. With this piece, they have performed with amazing pianists, such as Menahem Pressler himself at the 125th anniversary of the Concertgebouw in December 2013, Nino Gvetadze, and Paolo Giacometti.

In February 2014, he gave a repeat performance with this piece at the NEXT GENERATION Festival Bad Ragaz in Switzerland. Since then he has been invited every year to take part in this festival. He was also a member of the “Ensemble Esperanza”of the Internationale Musikakademie Liechtenstein, with students from around the world from the age of 17 to 25.Their debut CD has released in 2017 that was presented with the “Special Achievement Award” at the International Classical Music Awards 2017.

In May 2015, Takehiro and Mayu won the first prize at the Prinses Christina Competition, thereby they performed Mozart’s Sinfonia Concertante K.364 with the Hague Philharmonic Orchestra (October 2015, Conducted by Richard Egarr), Sinfonietta Rotterdam (November 2016, Conducted by Conrad van Alpen) and Dvorak’s String Quintet with the Rubens Quartet in different halls, including the Amsterdam Concertgebouw (February 2016). Also they were invited from “Musica Classica” International Music festival at Joao Pessoa in Brazil in December 2015.

Since September 2016 he is studying viola at the Conservatory of Amsterdam with Nobuko Imai & Francien Schatborn. In February 2017 he won the first prize at the 5th National Viola Competition in Amsterdam. In summer 2017, He had a recital tour in Japan.

Beginning of 2019 He was invited to play the Bowen viola concerto with the Schleswig-Holstein Symphonie Orchester.
Later in October he made his debut in Naples where he played a recital and Hoffmeister concerto with the Chamber orchestra of Caserta, he took part of the String Quartet class at the Seiji Ozawa International Academy Switzerland in 2018 and 2019.

In 2020, he won the 1st prize at the 27th Johannes Brahms Competition. He plays on a copy of a “Carlo Bergonzi” viola made by Roger Hargrave in 1991

Born in 1995 to a family of musicians, Nathalia Milstein starts the piano at the age of 4 with her father Serguei Milstein and enters his class at the Geneva Conservatory of Music. Nathalia continues her studies at the Geneva Haute Ecole de Musique with Nelson Goerner. After obtaining a Bachelor and Master’s degree with distinction, she moves to Berlin to continue her studies at the Barenboim-Said Akademie with Nelson Goerner. In 2018, still at the Barenboim-Said Akademie, she joins the studio of Sir András Schiff.

Nathalia launches her international career in 2015 by winning 1st Prize at the Dublin International Piano Competition and has been since then invited to halls such as the National Concert Hall in Dublin, the Zankel Hall (Carnegie Hall) in New York, the Wigmore Hall in London, the Gewandhaus in Leipzig, the Pierre Boulez Saal in Berlin or the Radio France Auditorium in Paris.

She was also awarded the Young Soloist Prize by the Médias Francophones Publics in 2017.

A keen chamber music player, Nathalia also performs regularly with renowned musicians and is invited to international chamber music events, such as the Intonations Festival in Berlin, the West Cork Festival in Ireland, Lavaux Classic in Switzerland, the Schiermonnikoog Festival or the Scaldis Festival in the Netherlands. She also appears on the last CD recording of the Prazak Quartet dedicated to works of Smetana.

For several years she has been playing in duo with her sister violinist Maria Milstein. Besides a busy concert schedule, they have also recorded two albums together – “La Sonate de Vinteuil” (2017) and “Ravel Voyageur” (2019) – both on the French label Mirare and praised by international critics.

In the 2020/21 season, despite a paused cultural life, Nathalia has had the chance to appear on stage with the Orchestre Philharmonique de Radio France conducted by Mikko Franck and the Geneva Chamber Orchestra with Arie van Beek.

In 2021/22 Nathalia will play in various venues across Europe as part of the “Building Bridges” concert season, curated by Sir András Schiff.

Supported by the Safran Foundation (Paris) and the Foundation “Tempo” (Geneva), Nathalia’s debut solo CD, featuring works of Prokofiev and Ravel, is released in 2018 on Mirare. A second thematic album, “Fugitives Visions”, will be released in september 2021 on Mirare.